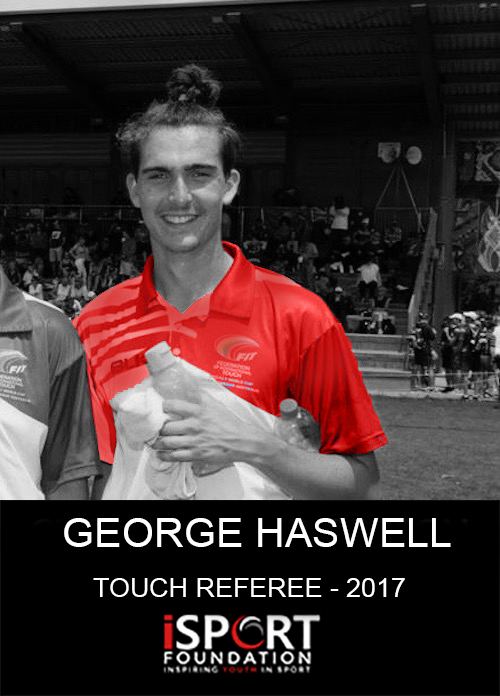 UPDATE:  George raised 100% of his target and will travel to Australia for the Trans Tasman Test Series in Caloundra

Thank you to everyone for your support!

Hi, I am George Haswell, I am 17 and am an international Touch referee.  I began refereeing touch in 2011 at the local touch competition at Blake Park, Mount Maunganui. Not long following my refereeing debut, with guidance from senior referees, I began refereeing 3 nights a week and travelling to Rotorua in the weekends for provincial events.  I achieved my Level 1 Badge in early 2012, the first step along the Touch New Zealand national referee pathway.  In December 2012, I was selected for my first national tournament – the National Secondary Schools Championships in Hamilton. From there I have officiated consistently at my local competitions and attended 17 national tournaments, which have taken me from Auckland to Christchurch and everywhere in between.  The highlight of my touch football career has been the 3 international events I have been involved in; the 2015 Youth Trans Tasman Test Series in Sydney, Australia; the 2015 Touch World Cup in Coffs Harbour, Australia and the 2017 Youth Trans Tasman Test Series in Auckland, New Zealand.

Refereeing is a challenge, but one I enjoy. Every game is different, with different situations and obstacles to deal with. I’ve formed lifelong connections with the people I’ve met through touch football.  Being so involved in a referees group that is more like a family, has been a very big part in the success of my touch career.

I have just been selected to represent my country, as a touch football referee at the upcoming Trans Tasman Test Series in Caloundra, Australia (between May 12th-May 15th 2017). The Trans Tasman series is known as the pinnacle of touch football, with New Zealand and Australia competing over 3 days to be the best touch nation in the world. Refereeing at this event puts me in the top 9 referees in the world and the top 4 in New Zealand.  This is an achievement which is the result of 7 years of hard work, and is one which exceeds my goals and expectations as a 17 year old volunteer referee.

Thank you for supporting me on my journey.