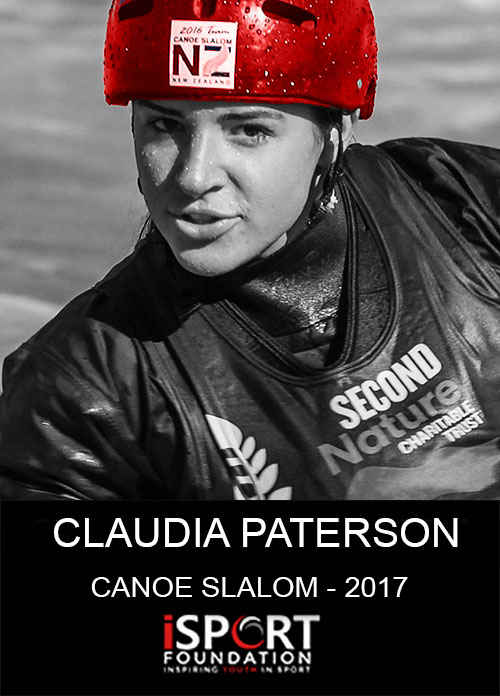 UPDATE – Thank you very much for supporting Claudia in raising funds! With your help, Claudia was able to fundraise $7650!

This is my third attempt at fulfilling a long-held dream: to compete for New Zealand at the junior world canoe slalom championships. The first time I qualified, at 15, it was beyond what we could afford. The second time, in 2016, all went well until I had a serious accident on the water in France.  Instead of wearing the silver fern on the world stage, I was flown home for open shoulder surgery.

Dealing with the disappointment was hard – and so was the rehab. It was 224 long and difficult days from the day of the accident to my first time back on moving water. But in April, eight months post-surgery, I had my best ever results at the national championships: third overall in the open category. I also retained the under-18 women’s K1 title and won every category in my age-group at the national secondary schools competition. It was encouraging to see the hard work paying off – and I am proud to be able to represent my country at the 2017 Junior World Championships in Slovakia this July.

At the moment I’m training twice a day, including sessions on the water, at the gym, and running up the hill in Mount Maunganui, where I live with my Mum.  At home I train in three different locations: the Wairoa River and a small, city stream for flat-water technique and the Kaituna River, 40 minutes away, for whitewater.  Now that I am back on bigger water, I also train some weekends at the Vector Wero Whitewater Park in Auckland, where I usually stay with my Dad.  Managing my time is a juggle: I’m in my final year of high school, doing Grade 8 speech & drama, and I also volunteer once a week helping people with intellectual disabilities. It has been a lot of fun taking Caleb to the gym and helping him with his workouts.

As a member of the New Zealand junior team, I will be spending five weeks in Europe in the lead-up to the championships: a training block in Prague, getting used to a new boat, and also competing at the Bratislava Open. All up the trip will cost around $8700, plus $3200 for the boat and paddle, totalling $11,900. We’ve been doing various activities to raise funds – from selling feijoas to renting out our house short-term –  but the amount still to raise is significant. I leave mid-June, so time is short! I would be hugely grateful if you could help me get there.

All donations through this platform are tax-deductible and will be deposited by the iSPORT Foundation into a specific account overseen by Tauranga accountant Bernice Grant. Thank you for following my journey. I so appreciate your support and encouragement.